Having served the people of Pacoima, San Fernando, and its surrounding neighborhoods for several generations, Drs. Oda and Sakaguchi were portrayed in the Pacoima City Hall mural that depicts local history, a portion of which, appears above.

Dr. Mary Oda was born Mary Sakaguchi, the fifth of seven children to Hisaji and Shiichiro Sakaguchi.  Her parents moved from the central valley to North Hollywood where they purchased land and grew produce.

As a child, Mary considered a teaching career like her mother, but at UCLA she found she had an aptitude for the sciences.  She considered pursuing research until her professor advised that in view of the political climate (1939-1940), there were no jobs in research for Japanese people. She turned instead to medicine, like her elder brother Sanbo.  Mary was one of two Asian Americans admitted to UC San Francisco. When World War II broke out, she was permitted to take her exams early before she returned home to be relocated to Manzanar Internment Camp with her family.

She worked briefly in the Manzanar camp hospital until she was accepted to the Philadelphia Women’s Medical school.  While in camp her elder sister, Chico, wrote for the Kashu Mainichi before camp, worked as a reporter for the Manzanar Free Press and introduced her to her husband James Oda.  They married while she was still studying medicine and joined him in Minnesota for her residency. He was teaching at the Government operated Japanese Language school for soldiers entering the Military Intelligence Service.  When he was assigned to Tokyo to join the military occupation forces, she went with him.

Upon her return to southern California, they raised chickens in Glendora along with her small three children.  When her mother helped with the children, she found work at a State Medical Facility. Not long afterwards, her brother Dr. Sanbo Sakaguchi encouraged her to join his practice opened in 1955 in San Fernando where there were few doctors servicing the minority community.  As Sanbo was licensed as a surgeon, he wanted another to doctor to assist in handling the burgeoning birthrate from the post war baby boom.

Dr. Oda’s general practice included obstetrics, pediatrics and occasionally a flu epidemic among ailments.  But her practice claims she delivered over 5000 live births during the almost 50 years she shared the medical practice with her brother Sanbo.  Even after she no longer worked full time, she continued to take continuing education classes to maintain her medical license in the event of an emergency. 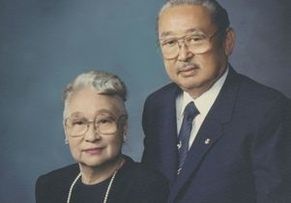 Dr. Sakaguchi, pictured left with his wife Kazuko, was a lifetime member of the JACL starting from his days in Milwaukee when he was a medical student. There are many stories of obstacles along his path but he was determined to be a healer. His journey is described in the book called, “Silent Scars of Healing Hands”, by Naomi Hirahara and Gwen Jensen.

Because he was the third son, his mother wanted him to be a doctor and then build a Tuberculosis Hospital in Nagano, Japan. She reasoned that fresh air and good food would help cure tuberculosis. With the outbreak of WWII, he was already in his second year and continued as medical student at Marquette University in Milwaukee, Wisconsin.

While studying to be a physician at Marquette University, the FBI followed him until a classmate told the agent to stop because Sanbo was a loyal American. He was classified 4C, an enemy alien, and was not inducted into the armed services and could not be an officer like his classmates after graduation. He did not received free medical education like the others. Sanbo graduated in October 1943.

While visiting Manzanar Concentration Camp in the absence of Dr. Teiji Takahashi who treated Ear, Nose and Throat ailments, Dr. Sakaguchi worked four or five hours a day in a hospital that was not well equipped. One day, he performed ten tonsillectomies and operated on a young girl’s appendicitis. After two weeks, he was boarding a bus to return to medical school. They stopped him and said, “Oh, you owe us $21 for room and board for two weeks.” He paid the sentries the $21 rather than stay another day. During one month Sakaguchi traveled ten thousand miles from Milwaukee to Philadelphia to Los Angeles to Manzanar to pick up the ashes of his eldest sister, Chico, and to attend family funerals for his beloved father and brother, Obo who was a dentist.

He then interned at Milwaukee County General Hospital for a year and was a resident at Muirdale Sanitarium until 1949. He became a teacher assistant at Marquette in General and Thoracic Surgery from 1944-1947 then became an instructor in Surgical Anatomy. He was licensed in Wisconsin and California for the record. His name, Sukenobu, means miracle worker. His destiny was written at birth.

Sukenobu was born in Glendale, California on July 13, 1917, the third son of Shiichiro Sakaguchi and Hisaji Yugasaki Sakaguchi. His father was a shoyu entrepreneur in Japan and his mother was educated at Tsuda Women's College. She was an elementary school teacher seven years before her marriage and immigrating to America.

Both struggled mightily, to raise their seven children, all of whom attended a university and five became doctors or dentists. Having grown up on a farm located in North Hollywood, Sanbo experienced real work, picking weeds, spreading chicken manure, plowing , bunching onions, carrots, turnips, beets, and cutting heads of lettuce dealing with heat, dusty rain, and cold from dawn to dusk. He was an obedient child that grew up in a time when children listened to their parents and were not adversely influenced by the peers or television.

Sanbo was a very quiet and obedient child. A third grade teacher was concerned that he was too quiet for his own good and wrote a letter to his mother. The teacher actually wanted him to speak up more and not be so quiet. His mother kept the letter in her Bible for the next forty years as she thought it was a compliment being very traditional. Like other Nisei, he attended Japanese Language School for nine to ten years. He graduated from North Hollywood High School in 1935. He graduated from UCLA in 1939. In the 1990’s, he and his wife were instrumental in the establishing the Nikkei Bruins.

In February 1950, he returned to California to start his practice. He married Kazuko, a girl he met after a chemistry class at UCLA. Together, they started a life of service. He became readily successful caring for patients and their families, and gradually the entire clan. He was then drafted on July 1953 since his status as an enemy alien was lifted and served in the army for two years. He furthered his skills as a bone surgeon while he was stationed at Madison General Hospital, Washington. He was promoted to Captain, U.S. Army while with the Army Medical Corp. returned to the San Fernando Valley in 1955.

His sister, Dr. Mary Oda, shared the practice with him for more than forty eight years noted that he felt like he was going out to play as he enjoyed his work so much. In fact, Ralph Ahn says that for many years on cold and rainy nights; he would bring his medical bag ready to take care of young athletes for Bishop Alemany High School football. He loved the energy and bravery they possessed. He gave his skill freely to his community in the valley. He was a father figure to his patients and the boys at the school and was honored on their Hall of Fame.

He began his judo days at the San Fernando Valley Judo Club under Sego Murakami as a youngster. He enjoyed practicing and soon held the rank of brown belt but had to stop due to a dislocated shoulder. For many years he volunteered as team doctor for the SFV Judo Dojo ready to assist at the head table during the Kohaku Tournament held in the SFVJACC gym each February. Murakami Sensei admired his dedication to judo as he donated countless hours to the sport. In 1950, he started as the team physician for the SFV Judo Club; team physician for the California cadre in the National Judo Championship since 1963.

In 1984, he served as medical volunteer assigned to the Olympic Judo competition. He also served in France, Argentina, Portugal, and Egypt for national and international meets. He earned a well-deserved honorary degree of fourth degree black belt.

Sanbo was not all work but played hard with the Los Angeles Billfish Club and SFV Fishing Club. Photos of the big catches and his smile tell us of his fulfillment during his fishing adventures. He was president and team captain in the Hawaiian International Billfish Tournaments. Well into his senior years, he was an avid UCLA football and basketball fan. Kay and Sanbo Sakaguchi’s name is on the UCLA Hall of Fame donor’s wall. The couple’s love of jazz and classical music led them to join the Asia America Symphony. They honored him as an Honorary Director. He especially enjoyed the music of David Benoit when he played "Cast Your Fate to the Wind".

On January 27, 2012, the main hall of the San Fernando Valley Japanese American Community Center Nikkei Pioneer building was dedicated in his name. A bit shy, he did not attend but family members represented him in front of a grateful Senior Hot Meals audience. The City of Los Angeles Council District 7 honored Dr. Sakaguchi and Dr. Mary Oda on the community mural located in Pacoima.

On August 25, 2013, the Southern California community gathered at the San Fernando Valley Japanese American Community Center to pay tribute to Dr. Sanbo Sakaguchi, “who liked and loved what he did.”